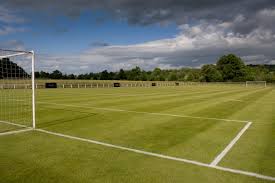 Saints marched on to round 4 of the South Wales FA Intermediate Cup with an emphatic 4-1 away victory against Treorchy.

Skipper Jordan Mortimore bagged a brace while Josh Harfoot added a well worked goal after Josh Morgan had opened the scoring from the penalty spot.

St Athan came into the game with an injury, suspension, watching rugby crisis. James Austin, Karl Steel, Richie Humphreys and Nicky Cox all missing while Mark Drysdale and Jonathan Ashton will likely miss the rest of the campaign, Drysdale posted to parts unknown while Ashton was confined to Aberystwyth. So in came Tony Charles, another attempt to retire foiled, Josh Harfoot and Jon Ball returned to the squad, Jamie Robinson and Tony Pugh were recalled from the reserves, while veteran Steve Stock was brought in between the sticks.

It was the home side who made the better start but couldn’t convert their territory into a clear cut chance, with Saints defenders blocking any site of goal with some good challenges.

St Athan got going and produced some fine football in the middle of the park, that saw Reece Lewis play in Mortimore but his first time side foot effort was well palmed away by the Treorchy number one.

The home side then saw their best effort, as a flick on put the forward in but Stock pulled off a fine save to deny the hosts. Then Saints breathed a huge sigh of relief as moments later the home front man was put in one on one but rolled his shot just wide of the post after Stock gave him the eyes.

Then the breakthrough, right on half time, a half cleared corner landed to Reece Lewis and he was taken down in the area and spot kick awarded. Josh Morgan stepped up to neatly roll the ball in from 12 yards and Saints had the lead.

Manager Bill Laing was not happy after the first half performance and made his feeling clear at half time, Saints needed to up their game.

And up it they did indeed, five minutes into the second period, Stock collected the ball in his area and bowled it out to Brad Young at left back, his ball found Leigh Lewis, inside to Morgan, Morgan in turn played in Mortimore, who coolly finished to double the away sides’ lead.

Treorchy rallied and saw two lobbed efforts narrowly over before Saints put the tie to bed.

Mortimore picked up the ball from deep, skinned two defenders before crossing from the left with outside of his right boot (to the delight of the capacity crowd) to Morgan who’s knock down was pin point perfect into Harfoot’s path who finished with aplomb into the roof of the net.

Treorchy threw caution to the wind and knew pulling one back could spark a comeback. Their forwards forcing Stock into another save before fizzing a shot inches wide.

Then controversy, a cross whipped in was met on the half volley, net rippled, the ball was not in it. The home side claimed a goal, the referee viewed that the ball had hit the side netting. Needless to say the home side were unimpressed, the ghost goal was not given, and more net pegs would have been added on to the agenda at the AGM.

Saints made sure that even if that goal had stood, it wouldn’t have mattered. The away side broke down the other end, Reece Lewis’ back heel played in Mortimore who finished with ease under the keeper for his second of the game.

St Athan in the hat for the next round despite not quite being at their best. Midfield duo Reece Lewis and Joe Laing worked themselves into the ground in the middle of the park, while Deon Garrison and Tony Charles were colossus at centre halves.

The result sees St Athan into the last 16 of the competition and the only Vale League representative left now after Vale United, Cowbridge and Rhoose were all eliminated.