Here are a few of junior write ups from today’s games. If you too want your clubs write ups to appear here, please email them to hyweldark@hotmail.co.uk
Under 15’s
Island Marine 6-2 Cadoxton Barry
Cadoxton Barry came up against the champions and showed it wasn’t gonna be an easy 3pts. Island started lively and went a goal up. Caddy levelled just before half time. Second half was a great battle that island went 4-1 up with 10mins left caddy had a pen to make it 4-2 with 3 minutes left island added 2 quick goals to seal the pts. Well played both team stand out play Ryan jacka (caddy Barry) drew perrett (island marine)
Under 14’s
Penarth Town Raiders 5-0 Island Marine

Raiders welcomed Island marine this morning what a cracking game, quality all over the pitch with two teams fighting for the top spot this season Raiders fitter and more clinical in the end with a top bins finish from Gregor, Ben V man of the match. 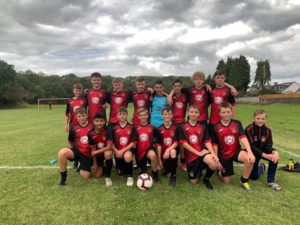 Dinas Powys Ravens recorded an impressive victory over Inter Penarth in their opening fixture of the season. After both teams initially struggled to play on a difficult pitch, Dinas opened the scoring through a rasping long range effort from Zac Baker. Further efforts from distance from captain, Ollie Foote and Jake Blackmore advanced the Ravens’ lead. Blackmore went on to cap a fine individual performance with a further four goals. Inter Penarth remained spirited and scored their only goal early in the second half. Dinas tried to develop their passing game, but the pitch continued to make this difficult. Further highlights of the second half came from an impudent back-heeled goal from Dylan Bowen and a cultured volley from the busy Zac Reed. An impressive start for the Ravens.